Meet The Doctor Behind Portion8™ 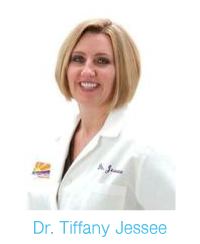 Portion8™ products are a division of BariWare®, LLC, a company that was founded by Florida's first female bariatric surgeon, Tiffany Jessee, DO. The company's goal is to develop products that help people live healthier lives and achieve greater success with their weight loss goals.

Dr. Tiffany Jessee studied under the direction of two of the top laparoscopic surgeons in the world and trained extensively in the LAP-BAND® and Roux-en-Y Gastric Bypass. Dr. Jessee went on to become the first female bariatric surgeon in the state of Florida. She opened her practice in Largo, FL in August of 2003, and is one of a handful of surgeons in the Tampa Bay area invited to place the REALIZE® banding system.

Dezi Zevin is a seasoned Physician Assistant with the Sun Coast Bariatrics team, working closely with Dr. Jessee to provide patients with exceptional care. With over 9 years' experience as a P.A. she has worked in orthopedics, providing patient care and performing procedures.

In 2011, Dr. Jessee and Dezi were sharing notes on a plane ride home from a training course and discussed the importance of helping bariatric patients prepare for surgery. They agreed that portion control was an integral part of effective weight-loss plans, and were shocked to later discover that very little existed to help with this. And so they created a portion-control tool for their bariatric patients called the BariBowl®. Since its launch in 2011, the BariBowl® has been a success, generating orders from multiple countries and establishing a distributorship in Australia, with plans in place for the UK and Canada.

Fueled by the expanding demand for the BariBowl, Dr. Jessee & Dezi felt that rebranding it for a wider audience made sense, especially given the ever-growing obesity rates around the world. In 2013, the BariBowl® was rebranded and this time, a whole new product line was created: the Portion8™ Living cookbook, Portion8™ Plate and Portion8™ Tote. The concept behind the product line is to develop portion control products that make it easy to live healthy and achieve your weight loss goals.

A perfect portion. Purchased for after my gastric bypass surgery. I love them!

I am post gastric bypass and I purchased a plate to help me learn portion control for my new pouch. It did show me how to utilize the ounces allowed. I like the adjustable yellow tabs.